The Telegraph asks “Would you cheat for your child’s education?” 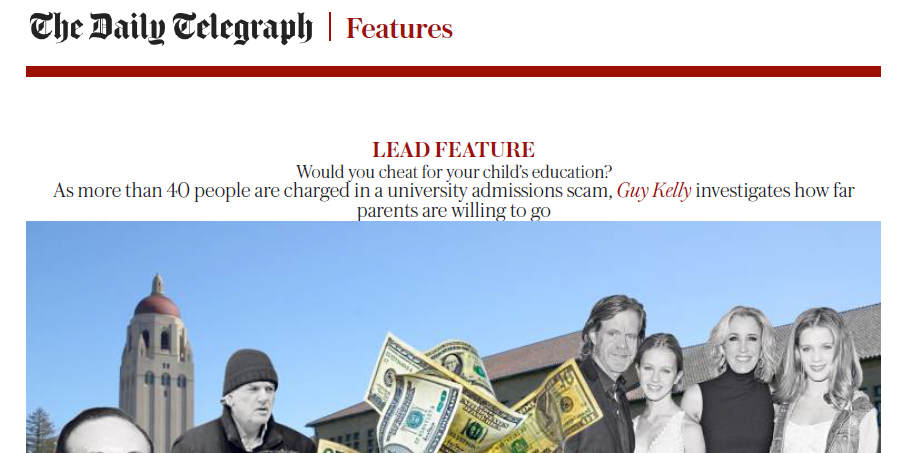 As a story set to warm the hearts of everybody not directly involved, it really has the lot: alleged widespread abuse of privilege publicly unmasked by the highest authorities, the deafening sound of New Money clashing with Old, a heavy dose of Hollywood glamour but an even heavier dose of Hollywood hypocrisy, some downright bizarre details and, perhaps above all, the overwhelming sense that it couldn’t have happened to nicer people.

In the United States on Tuesday, an FBI investigation that went by the name “Operation Varsity Blues” revealed that more than 40 people – mainly wealthy parents – have been charged in a nationwide university admissions scam that allegedly involved helping students with weak academic grades cheat on entrance exams, acquiring sports scholarships for entirely non-athletic teenagers, and bribery payments that extended into the millions, all in order to gain places at elite universities. Among those indicted are former Desperate Housewives star Felicity Huffman and fellow Hollywood actress Lori Loughlin.

The scheme, which one prosecuting lawyer claimed to be “the largest-ever college admissions scam”, was an elaborate one. Through his company Edge College & Career Network, William “Rick” Singer established two scams – one involving cheating on exams, the other organising the payment of bribes to sports coaches at top schools. Authorities claim that between 2011 and 2018, Singer earned around $25″ million (£20″million) from parents paying anywhere between a few thousand and $6.5″million (£5″ million) for his services. There’s no suggestion the universities had knowledge of the schemes, and nor is it thought the students knew what their parents might have been up to.

To onlookers in Britain, it might all seem very American. Some elements – such as Loughlin allegedly paying more than half a million dollars to obtain fake documents claiming her YouTuber daughter Olivia Jade and her sister were elite rowers (neither girl has ever been documented near a boat, let alone crewing one) in order to enrol at the University of Southern California – sound lifted from a television script. Huffman’s alleged “charitable contribution” of $15,000 (£11,500) to Singer’s fake charity, allegedly made in order to facilitate cheating on her eldest daughter’s SAT results, would have made a terrific Desperate Housewives plotline. In reality, however, how far away is it from what goes on in this country?

“It’s quite a shocking story, outrageous really, betraying the children by just putting them in great places for the wrong reasons – but we all know that parents try to go the extra mile to try to get the right school for their kids,” says Vanessa Miner, managing director of Gabbitas, an education consultancy.

Established in 1873, Gabbitas offers advice and guidance to parents for hoping to find “the right school” for a child, charging “a percentage of the first year’s fees” for its services. That ranges from £500 for a consultation to several thousands for a long-term package.

“We work with a lot of international clients, and with some there is an expectation that they can approach the organisation and do something that will allow them to get preferential treatment. And that’s really not the case, so we disabuse them of that.” It may not be the way Gabbitas operates, but other agents may be less scrupulous.

Only three years ago, The Telegraph filmed David Fletcher, the then registrar at £36,660-per-year boarding school Stowe, saying a six-figure payment to the institution would be helpful when there was a “marginal decision” over whether a pupil should have a place – later admitting one overseas family had given £100,000 to secure admission. Fletcher later resigned, but the same investigation found that educational consultants were prepared to facilitate payments of up to £5″million to public schools on behalf of families hoping to win places for overseas children.

Anecdotal examples of bribery in the schools system reveal the creativity of sharp elbowed parents, if nothing else. There is the “old-fashioned” route: libraries or new research wings built using a new parents’ money. A former pupil at one prestigious Home Counties school told me a new sports pavilion was once donated by a father whose daughter desperately needed a place.

Then, there are the movers. According to 2017 research by Santander Mortgages, one in four parents with school-age children have either bought or rented a new home to get into a particular school’s catchment area. There are perennial rumours of grandparents’ addresses being registered, second homes being bought for the sole purpose of appearing local, and even tiny boxroom flats being cycled between generations of connected parents desperate to have an anchor – any kind of anchor – near a high-performing state school.

Others verge on callous. A source at another Home Counties independent school, which uses its foundation to offer bursaries to children who have lost a parent, remembers one mother pretending to be a widow in order to sway admissions tutors. Other parents reportedly arrange for fake baptism certificates to qualify for religious schools, tell teachers their marriage has broken down so that their child has to live between two addresses, and bribe private doctors to give evidence the child has special needs, and thus preferential treatment. Often, schools are powerless to investigate.

“Some places are hugely oversubscribed, and they can’t have them all sitting tests, so they use filtering systems to find out which children are most suitable,” Miner says. “We don’t deal with state schools, but overseas parents particularly will come to us with a very famous public school in mind, and if it’s a highly academic environment then it’s often not right for their child. Parents don’t always like it, but we pride ourselves on being honest with them, and they tend to trust us.”

Miner believes the Ivy League scholarship system among US universities may be more open to abuse than in Britain, but the potential for duplicitousness doesn’t stop once admission has been gained. Last year almost 50 university vice-chancellors wrote to the Government calling for a ban on “essay mill” websites – services that allow students to buy original, completed work that often outfoxes even the most sophisticated plagiarism software. It is a central plot point in ITV’s Cheat, a psychological drama airing this week, and no legislation has been brought in to stop it. One website I visited yesterday, essayace.co.uk, “guaranteed a First Class” essay written by an academic with a PhD and at 35,000 words – the standard length of a doctoral thesis – could be delivered within a week for £1,538.

Across the Atlantic, the response to the scandal has been a mix of outrage and glee. Donald Trump Jnr has been revelling in the misdeeds of Hollywood stars, though if he wishes to investigate the topic further, Twitter users have swiftly reminded him of claims that his father donated $100,000 to his alma mater, Wharton School of Business at the University of Pennsylvania, the same year he enrolled. But I’m sure that’s all above board.

The culture, it might appear, is rife. But our ability to dismiss it as a problem only occurring across the pond is fast fading.